Ismael Zambada-Imperial, aka “Mayito Gordo,” Worked with the Sinaloa Cartel to Import Narcotics into the United States 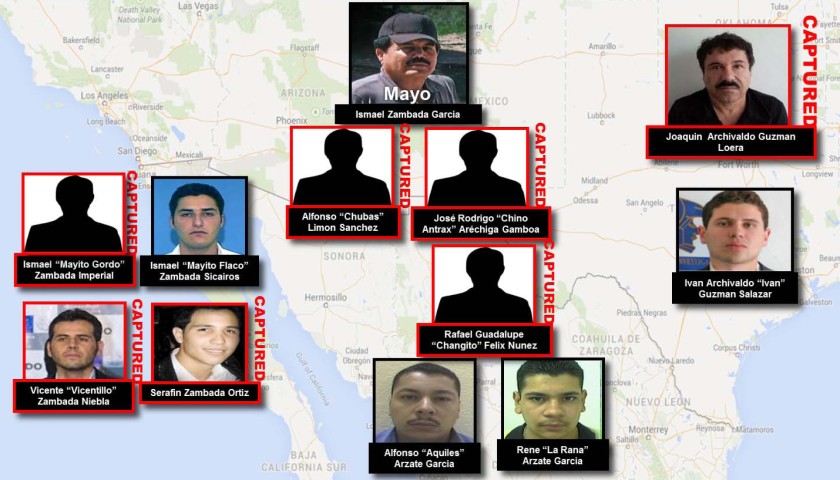 Zambada-Imperial pleaded guilty to all charges in a superseding indictment returned by a federal grand jury in San Diego on July 25, 2014. The indictment also charges his father, the alleged leader of the cartel, Ismael Zambada-Garcia, known as “El Mayo;” as well as another son of El Mayo, Ismael Zambada-Sicairos, known as “Mayito Flaco;” and Ivan Archivaldo Guzman-Salazar, known as “Chapito,” whose father Joaquín “El Chapo” Guzmán Loera was the former leader of the Sinaloa Cartel along with Mayo. Zambada-Imperial was arrested by Mexican authorities in November 2014. Zambada-Garcia, Zambada-Sicairos, and Guzman-Salazar remain fugitives.

In a proceeding today before U.S. District Judge Dana M. Sabraw, Zambada-Imperial accepted responsibility for his role as a leader within the Sinaloa Cartel, acknowledging that he organized the transportation and distribution of thousands of kilograms of controlled substances, including cocaine, heroin, and marijuana for importation from Mexico into the United States. Zambada-Imperial also admitted to directing acts of violence for the purpose of promoting the Sinaloa Cartel’s narcotics trafficking activities. A sentencing hearing is scheduled for April 29, 2022 at 2 p.m. before Judge Sabraw.

“Because of the dedication and determination of the DEA and our law enforcement partners, today we are one step closer towards dismantling the violent Sinaloa Cartel with the guilty plea of a Sinaloa Cartel leader,” said DEA Special Agent in Charge John W. Callery. “The DEA remains confident that we will capture the remaining fugitives of this investigation and bring them to justice, along with many additional members of the Sinaloa Cartel.  If the public has any information on the whereabouts of these fugitives or information on the Sinaloa cartel, we urge you to contact the DEA at (858) 616-4100.”

“Zambada-Imperial’s guilty plea today sends a message to other drug kingpins operating in Mexico. There is no place to hide because our law enforcement partners will find you and work tirelessly to bring you to justice in the United States,” said Acting U.S. Attorney Randy S. Grossman. “Our investigation and prosecution of other high-level Sinaloa Cartel members is continuing and is having a significant impact on the global operations of the cartel.” Grossman praised Assistant U.S. Attorney Matthew J. Sutton, DEA agents and all law enforcement partners for their excellent work on this case.

The Southern District of California prosecution in this case is part of a multi-year investigation that, in total, has resulted in charges against over 125 people and has had a significant impact on the worldwide operations of the Sinaloa Cartel. This investigation has also offered one of the most comprehensive views to date of the inner workings of one of the world’s most prolific, violent and powerful drug cartels. Cartel members and associates were targeted in this massive investigation involving multiple countries, numerous law enforcement agencies around the United States, a number of federal districts and over 250 court-authorized wiretaps in this district alone.

This case began in late 2011 as an investigation of what was at first believed to be a small-scale drug distribution cell in National City and Chula Vista. It became evident that the drugs were being supplied by the Sinaloa Cartel, and the case evolved into a massive multi-national, multi-state probe that resulted in scores of arrests and seizures of 1,397 kilograms of methamphetamine, 2,214 kilograms of cocaine, 17.2 tons of marijuana, 95.84 kilograms of heroin, and $27,892,706 in narcotics proceeds.